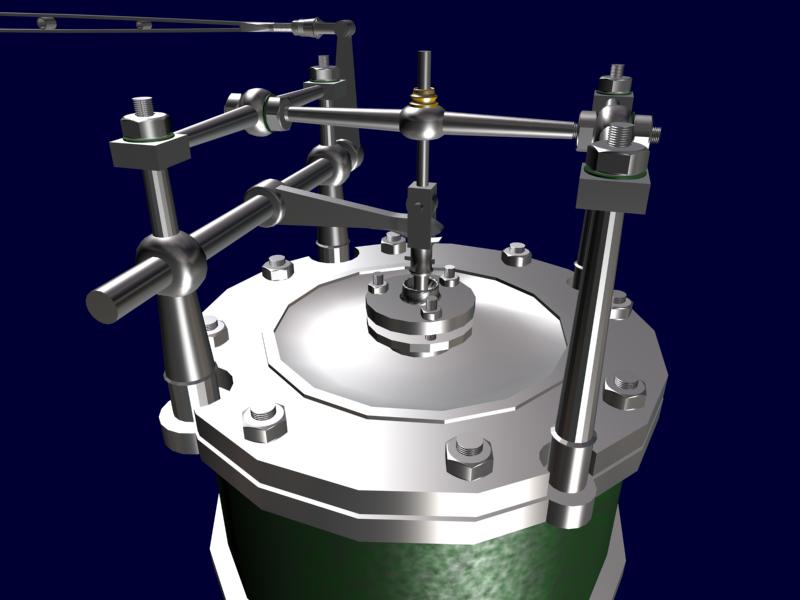 The three Cornish double-beat valves of Cruquius engine have different diameters, but the same design. To demonstrate the working we have taken Cruquius’ exhaust valve as an example. It is fitted at the back next to the cylinder, on top of the condenser. In the animation on the right an opening was made into the valve so you can look inside the valve body. The valve has two seats (red), arranged one above the other. The two seats are only visible when the valve is open. The upper seat has a slightly smaller diameter then the lower seat. The green parts are the fixed valve parts. At the top this part is disk-shaped, at the bottom it is a ring. Both are supported by six, for this valve characteristic, arched metal sheetings. In the animation you can see some of these sheetings (grey) between the two green valve parts. The sheetings are held in position against the valve body by the large bolt at the spokes in the opening above the condenser. The actual valve is the blue object shaped like a bell, in the middle. It is the only moving part, and its is moved up and down by the valve rod. The opening in the valve for this rod is closed by a packing ring (orange) and a packing lid. The valve rod is operated by the valve gear (not visible in the drawing) via an angular transformer and a long horizontal rod. In the animation the used steam from the cylinder enters the valve horizontally from the left through the opening (flange) and leaves the valve vertically at the bottom to the condenser. The steam rushes through the valve via two particular ways. The first is through the inside of the valve via the upper seat, the second leads down via the outside of the valve and then to the inside via the lower seat to the condenser. The valve requires only a small lift to open the large circular passages. In the closed position the pressure above the valve is larger than that below, the pressure difference works on the annular surface which represents the diameter difference between the seats. In this way the pressure keeps the valve closed, but the force needed to open it is quite modest, much smaller than the force needed to open a simple disk valve where the pressure acts on the entire valve area. The Cornish double-beat valve is thus said to be (almost) ‘balanced’.