First the general animation above. The complex frame on the right is the ‘valve gear’, that is Cruquius’ valve control system. To work the engine, three Cornish double beat valves must be operated: the steam valve, the equilibrium valve, and the exhaust valve. On the floor, on top of the condenser, the exhaust valve and beneath on the engine foundation the equilibrium valve on the left and the steam valve on the right. So for the operation of the valves we also have three arbors that run in bearings fitted to the valve gear frame, one above the other. On top the steam arbor, the equilibrium arbor in the middle and the exhaust arbor at the bottom. On these arbors operating handles are fitted that are tripped by the ‘plugs’ on the ‘plug rod’. These plug rods move with the large lever at the top, which is connected to the piston rod of the engine. Beneath the floor are two auxiliary arbors, the cataract arbor and the latch arbor. The two rectangular ‘boxes’ down on the foundation are the cataracts, timing devices, left for the equilibrium valve and right for the steam and exhaust valve.

For further explanation of the valve gear now look at the first detail animation of the steam valve. The steam valve (5) is operated via the steam arbor (1), the upper arbor in the valve gear frame. To control the valve there are three mechanisms:
a. To open: a weight (3). The valve opens itself by a weight that pulls the valve open.
b. To close: a rod (4) runs from the valve via an angular transformer (6) to a lever with a handle (2). An open valve is closed by the ‘plug rod’, which moves with the engine. The brass plug (8) on this rod can move the handle (2) of the lever on the steam arbor (1) and thus close the corresponding valve (5) (to allow a better view in the animation we left the rods out).
c. To remain closed: a pawl, the scoggan, which can be lifted by a short lever, the scoggan lever (7). This blockage ensures that the valve is not immediately pulled open by the weight when the plug releases the handle. The equilibrium and exhaust valves are controlled in a similar manner.

The engine driver’s action is required to start up the engine, the engine is started manually. After an idle period, when the cylinder is cold, the steam cycle cannot be started right away. At first the opening and the closing of the valves must be controlled manually. The cylinder is heated slowly with hot steam. Then a number of manually-controlled strokes are made to establish the condenser vacuum. Only then the driver can switch to automatic operation. This is established by activating the cataracts, these are timers. A cataract is a timing device, working according to the principle of the automatic door-closer. The cataract plunger is connected to a rod which lifts the scoggan levers in order to open the steam, exhaust and equilibrium valve. The ‘closer’ delays the opening, a delay which can be determined by the setting, so there is an adjustable pause between opening and closing of a valve.

Finally go to the second detail animation to view the complete valve control in all its details. A complete engine cycle: The engine continuously makes two strokes, an up going steam stroke and a down going pump stroke.
a. The cataract on the right first trips the blocking pawl lever, scoggan catch, of the exhaust valve, so this is opened by the weight. Now the used steam from the previous stroke is discharged into the condenser. Then the blocking pawl of the steam arbor is released and the weight on the steam valve pulls the steam inlet open. Steam is admitted under the piston and the piston moves upwards.
b. The beams now lower the pumps. The plug rod also descends, and about halfway of the stroke the descending plug pushes the steam valve handle on the steam arbor down so the steam valve closes. In a similar way, the exhaust valve is closed at the end of the steam stroke. Below the floor a separate plug pushes the right cataract piston back into its highest position via the cataract arbor and the corresponding fork.
c. When the valves close, they are held in the closed position by the engaging scoggan pawls, otherwise the weights would immediately pull the valves open again.
d. The engine comes to a stop in the top position. The scoggan of the equilibrium valve is lifted by the cataract on the left. The weight now pulls the equilibrium valve open, which allows the steam from below the piston to flow through the equilibrium pipe to the space above the piston, and as a result the piston pressures are now in equilibrium.
e. The piston starts to descend by gravity. The beams now move the pumps up and these raise water. At the end of the pump stroke the equilibrium valve closes, and the engine comes to a stop in its starting position. Ready for a new cycle to begin. 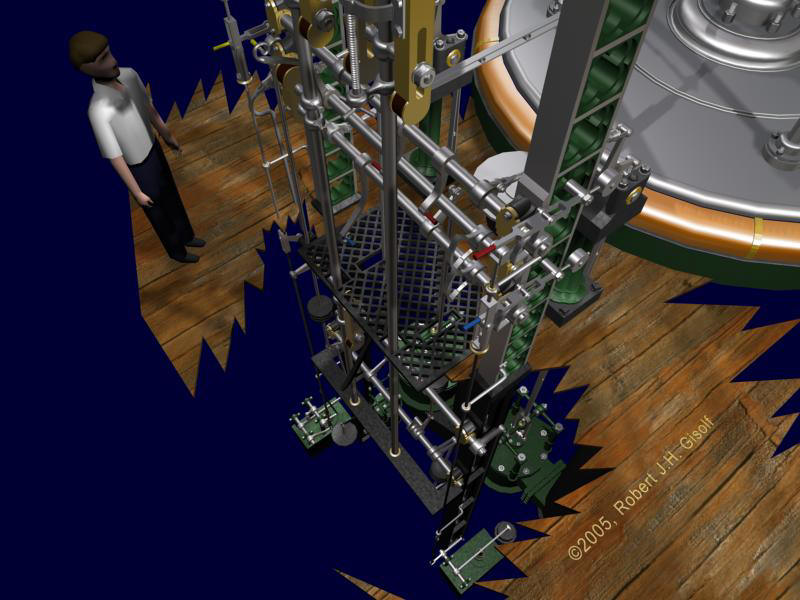 Driver Harry Handle remains vigilant, even if the engine runs smoothly, frequent small adjustments are required. The steam pressure varies and so does the condenser vacuum. And if the state of lubrication changes, the engine can move further upwards than required. Because the piston is not fitted to a rotative crank it can even go too high up. When that happens the weight hits a copper bell to warn the engine driver. So Harry Handle has to watch the engine constantly.

The above explanation of how the valve control system works, is an adaptation of a text of Cornish engine specialist Jan Verbruggen. As there were no suitable detailed drawings, Robert Gisolf has created the 3-D animations. We would like to thank Roel Jongepier and Piet van Putten for their help.